Speed of Memory Cards in Cameras

Informations about the speed of memory cards are difficult to find on the internet. Even though the transfer speed to the computer is important after shooting ,it is probably also very depending of the reader used. What interested me most is the speed of the memory card in Nikon cameras. Because nothing is more annoying than having to wait during the shoot until the green light goes out , which indicates the data transfer from the camera.
All measured values ​​for the speed of memory cards have been determined with the Nikon D800 . 16 TIFF images were taken and the difference between the time of exposure and the time of file creation was measured . Each TIFF file from a Nikon D800 is always 104 megabytes ( 109 314 048 bytes ) in size , regardless of motive or any camera settings. So for each test sequence with 16 shots more than 1.6 gigabytes of data are generated.
I changed the way how I took the measurements. Now I just take a movie with a second camera from the back of the first camera. The green light on the back of the camera shows access to the memory card. I just measure the time difference between the first and the last frame with the green light.

Click on the header to sort. Use the search field to filter the results. Example: search string „SD“ shows all SD cards Search string „Lexar 16“ all Lexar cards with 16GB size

Prices could´ve changed in the meantime

Which card to choose?

Even though memory cards can never be fast enough ;-), you have to pay attention to the camera settings. Some Nikon cameras offer two card slots which can be used in different ways. In my opinion the best configuration is to use the slots in backup mode for security reasons. In this mode each image will be written to both cards at the same time. However, as the images are not written simultaneously but alternately to the memory cards, this mode significantly prolonges the storage time. If you use the „backup“ mode it makes sense to invest in a fast SD-card. 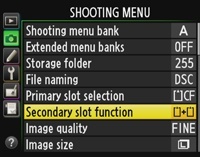 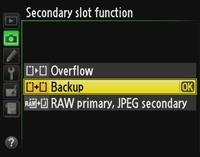 The other two settings „Overflow“ or „RAW primary, JPEG secondary“ are dangerous, as the data loss occurs if the card is faulty. Unfortunately this happens more often than you would imagine.

Example of a corrupt NEF file from a Nikon D800. The hideous was that the embedded preview was undamaged, so the error didn´t show while looking at the camera but only after the RAW file was processed. In the camera manual you will find a list of approved memory cards for your camera. Of course other cards that are not on the list work also – but the approved cards have been tested by Nikon beforehand. Press the small preview images in the table to see a bigger picture of the card I tested. Even though Amazon uses unique product identifier, please check that the product matches the image. Generally speaking: – CF cards are faster than SD cards – Small cards are faster than large cards – Modern cards are probably faster than the previous generation.

Unfortunately I don´t own all the cards I´ve tested. But I have a nice advantage: I teach workshops for NikonSchool in Germany (among others about D800 and wedding photography), and if time permits before the workshops start, some participants make their card available for testing. I´m a professional, full time photographer and shoot weddings and events. After switching from the Nikon D300 to the D800, I realized that the memory cards used sofar weren´t suitable anymore.